Who Gets Over Breakups Quicker – Men or Women? 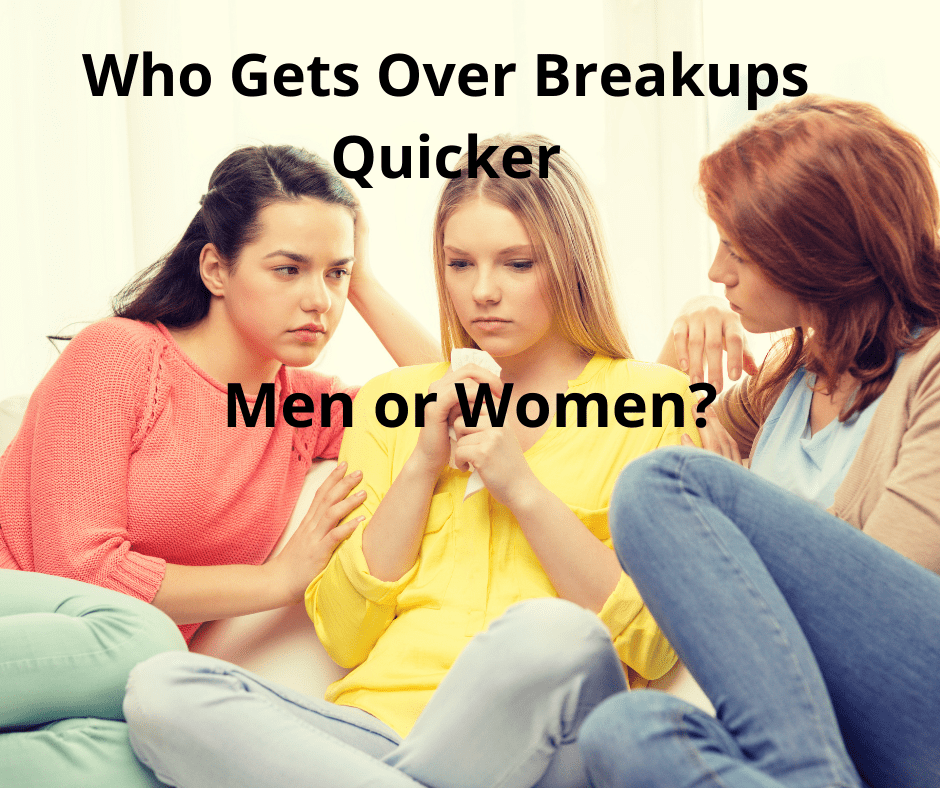 Do you know who gets over breakups quicker, is it men or is it, women?

The answer is that men are more likely to move on to a new relationship quicker, making it look like they are over the breakup. Yet, even though it looks like he got over the breakup quicker that simply isn’t true. Men get over breakups in a totally different way to women.

Breakups are painful and they can affect you for weeks, months, years or for some people even decades! MRI studies show that the same parts of the brain that are triggered by physical pain are triggered by the emotional pain that comes from breakups. What that means is breakups are processed in the brain, in the same way, a broken bone is.

While men and women go through the same pain. Men look for ways to hide and disguise their feelings while women talk about how they feel with the people in their life to understand what has happened.

Women vent, cry and process the pain so they can get over it.

I know that women are often puzzled by the way that men deal with breakups! So, let’s look at the typical response so you can make sense of it.

Now, of course, there are always exceptions to the rule and not all men or women react the same to breakups. This blog is based on the standard response as well as research.

Researchers from Binghamton University and University College London found that women experience more emotional pain following a breakup. Yet they more fully get over breakups.

The researchers asked 5,705 participants in 96 countries to rate the emotional and physical pain of a breakup on a scale of one (none) to 10 (unbearable).

What the Lead Author of the Study Found about Breakups

According to Craig Morris, the lead author of the study, the differences come down to biology. Women have more to lose by dating the wrong person.

“Put simply, women are evolved to invest far more in a relationship than a man,” Morris said. “A brief romantic encounter could lead to nine months of pregnancy followed by many years of lactation for an ancestral woman, while the man may have ‘left the scene’ literally minutes after the encounter, with no further biological investment. It is this ‘risk’ of higher biological investment that, over evolutionary time, has made women choosier about selecting a high-quality mate. Hence, the loss of a relationship with a high-quality mate ‘hurts’ more for a woman.”

Conversely, as men have evolved to compete for the romantic attention of women, the loss of a high-quality mate for a man may not “hurt” as much at first, Morris said.

“The man will likely feel the loss deeply and for a very long period of time as it ‘sinks in’ that he must ‘start competing’ all over again to replace what he has lost — or worse still, come to the realization that the loss is irreplaceable,” he said.

Morris said that breakups are important because most of us will experience an average of three by age 30, with at least one affecting us strongly enough that it substantially decreases our quality of life for weeks or months.

“People lose jobs, students withdraw from classes, and individuals can initiate extremely self-destructive behaviour patterns following a breakup,” he said. “With better understanding of this emotional and physical response to a breakup — Post Relationship Grief — we can perhaps develop a way to mitigate its effects.”

The research found that while breakups hit women the hardest emotionally and physically, they recovered more fully and even came out emotionally stronger. Men, on the other hand, never fully recover — they simply move on or shut down completely.

So why do guys then move on so quickly or shutdown?

The answer is quite simple, instead of taking the time to feel the pain and deal with it, they want to cover it up by using a new relationship or avoidant behaviours to make them feel better.

Why Breakups Looks Worse for Women

From childhood on, women are taught to express what they feel and when they breakup with someone that is exactly what they do. They will talk and cry with their friends for hours, analysing what happened, why and attempting to learn the lessons so they never have to go through that pain again. They will even seek professional help to move on. Women’s pain is usually on display for everyone to see.

On the flip side, men don’t show what they are feeling other than getting angry. Men are taught not to show their emotions so they don’t! From childhood, men are taught that they should be strong, in control and it isn’t acceptable to fall apart. Whereas drinking too much, working excessively or sleeping with someone new to get over an ex is often encouraged! I am sure you have heard the cliché you have to get under someone to get over someone! Many guys follow this advice!

The problem is that these destructive behaviours including being with someone new are like putting a band-aid on a gaping hole – it doesn’t work.

It isn’t what it Seems

So, when it looks like he is moving on, it isn’t always what it seems to be. Men do not like to look like a failure, especially when a relationship ends.

Moving on is his way of doing what he feels will make him feel better and also look better in everyone else’s eyes.

In fact, he will do whatever he can to take his mind off the pain that he feels. As a result, he will push down the grief he feels.

Men want to be their partner’s hero and make them happy. When a relationship falls apart he thinks he has failed at that, so it’s his fault! They might say they blame the other person, yet underneath they are confused about what they did to cause it to happen. It feels like crap for him, even if he doesn’t show it.

After a painful breakup, some men shut down and give up on relationships altogether. Others chose simply to have superficial, non-committal relationships to avoid any more pain.

Getting into a rebound relationship is the typical guy thing to do (although some women do the same thing). It makes him feel good that someone else wants him.  As well as being a sign that he is strong, in control and ok.

Basically, it shows the world that he isn’t a ‘failure’ – the one thing he dreads the most!

Ladies no matter how much a guy who has just broken up with someone else chases you, stay away! The rebound relationship will only end badly for both of you.

Lack of Support after Breakups

Women generally have great support networks that allow them to process and deal with breakups. Men may have friends, yet unfortunately, they rarely have the type of conversations a group of women do post-breakup or the wonderful support women have. Therefore, they don’t get the chance to vent about how bad they feel, how much it hurts or how to fix things. Sad, but true.

Men don’t quite get over Breakups!

After a breakup, most men’s default way of dealing with it is feeling confused and angry. As well as trying to ignore what’s happening and finding some way to feel better.

The problem is by keeping these emotions locked away, men can’t heal or find that closure they really need.

The biggest issue for men is every loss they experience will just add up, getting bigger and bigger over time because simply ignoring the pain doesn’t make it go away.

He Keeps Making the Same Mistakes

Because men don’t work through breakups, they don’t get the chance to learn from them. So, they find themselves stuck in the same patterns that don’t work for them. They may feel like moving on stops the pain, yet it can create pain that repeats and suffering that just doesn’t end.

Men are no less emotional than women but just don’t handle their emotions in the same way as women do. You may look at him on social media and feel he isn’t feeling anything.

Yet the reality is the breakup will be hitting him as hard as you. He will also be more likely to be angry while you cry!

You might hate the fact that he seems to be enjoying life while you are crying, over-thinking, battling grief and feeling crap about yourself. Yet you are healing. While if he continues to go from one relationship to the next or gets buried in his work and destructive behaviours he will never fully heal.

Ignore the actions you see and know that he’s suffering just as much, if not more than, you.

Of course, as I mentioned at the beginning of the blog there are plenty of men who had the support and who have taken the time to heal after a breakup so they don’t repeat their patterns.

If you are Struggling

Guys, you don’t have to do this alone. You don’t have to get caught up in repeating your patterns, destructive behaviours or trying to numb the feeling with someone else.

Ladies, if you want to beat those toxic patterns you can.

Here are 11 Tips to Get over Breakups.

Breakups are tough and can be hard to get over. You don’t’ have to do it alone. If you are struggling, why not book in a free discovery call – you have nothing to lose and everything to gain. It’s simple, just book here.

Is the Rejection Mindset Affecting You?